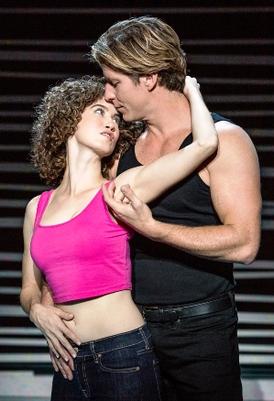 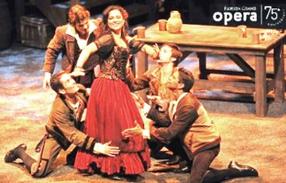 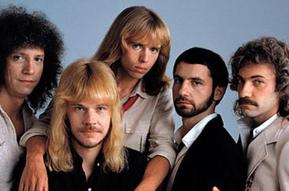 Carmen, one of the world’s most famous and frequently performed operas, shocked Parisian audiences at its first performance in 1875. The seductive, fiery girl from the cigarette factory, the crazed soldier, and swaggering matador were without precedent on the operatic stage. But, within just a few years Carmen was being performed all over the world.

Carmen gets any man she wants, and then gets rid of them when a better one comes along. When she sets her sites on Corporal Don Jose, he doesn’t stand a chance. He’s completely smitten and gives up everything - His career, mother and, even the girl he intends to marry, just to be with this sultry siren.

For quite some time they are engaged in a great passion, but then Carmen meets a famous matador and dumps Don in a heartbeat. The difference is, this time, she has finally pushed a man too far. Georges Bizet’s passionate score and the opera’s sordid tale of obsession, betrayal, and defiance, make for a truly operatic experience in every way.

Audiences love the music sung in French with titles projected in English and Spanish. This classic, traditional production of Carmen will be performed at the Broward Center in the Au-Rene Theatre, located at 201 S W 5th Avenue, Fort Lauderdale, December 1 and 3, 2016. Tickets start from  $23 to $230, at the Center’s box office. For more information call 954-462-0222.

Be a part of the discussion one hour prior to each performance by one of Opera’s leading experts. Not only will you learn about the entire plot, you’ll also hear all the entertaining stories and backstage gossip that is part of any opera.

& THE CASINO AT DANIA BEACH

Twin brothers Chuck, a guitarist, and drummer John Panozzo, originally got together with their neighbor Dennis De Young, a keyboardist and vocalist and formed the band “The Tradewinds.” In 1996 the  Panozzo bothers  joined De Young at Chicago State College and kept the group together doing gigs at high schools and frat parties while studying to be teachers. The same year they added a college friend, John Curulewski, on guitar, after one other member Tom Nardini departed. Guitarist James “J. Y.” Young joined the group in 1970 making the group a quintet.

In 1972, members of the band decided to change the name when they signed to Wooden Nickel Records after they were scouted by a talent scout at a concert. Several suggestions were made and the name Styx was chosen as it was the only one that none of them hated.

On the strength of their releases and constant playing in various clubs , the band established a base in the Chicago area. Their  song “Best Thing,” remained on the Billboard’s Hot 100 chart for six weeks. Their Power Ballad “ Lady,” began to be recognized as number one, two years after the album was released  in the U. S., and it  went gold.

This Classic story, full of passion and romance, heart pounding music and sensational sexy dancing, record-breaking  musical, is even better than before in this all new production. Since its Australian debut in 2004, Dirty Dancing has become a world-wide phenomenon, with productions staged in most countries and throughout Europe, consistently breaking box office records. It is also wowing audiences in Italy with each individual production using local French, German, and Italian speaking companies. As of 2009 it earned more than $214 million world-wide.

The French tour alone has played to 500,000 people since it was launched in January 2015. Dirty Dancing , a world-wide smash hit tells the classic story of Baby Houseman and Johnny Castle, two fiercely independent young spirits from two different worlds who come together in what will be the most challenging and triumphant summer of their lives. Featuring the hit songs, “Hungry Eyes,” “Hey Baby,” “Do You Love Me?” and the  heart-stopping “I’ve Had the Time of My Life.” This crowd pleasing, award winning adaptation hits the jackpot.

It’s the summer of 1963, and 17 year old Frances Baby is about to learn some major lessons in life, as well as a thing or two about dancing. On a holiday in New York’s Catskill Mountains with her older sister and parents, she shows little interest in the resort's activities, and instead discovers her own entertainment when she stumbles across an all-night dance party at the staff quarters. Mesmerized by the raunchy dance moves and the pounding rhythms, Baby can't wait to be part of the scene, especially when she catches site of Johnny, the resort dance instructor.

Her life is about to change forever as she is thrown into the deep end as Johnny’s leading lady both on and off stage.  Don't miss this opportunity to see this dynamic musical, on stage, at the Arsht Center from November 28, thru December 4, 2016. Performances take place in the Ziff Opera  House Theatre evenings at 8 p.m., matinees 2 p.m. Sundays 1 and 7 p.m. Tickets range from $39 to $78, available at the box office located at 1300 Biscayne Blvd., Miami. For more information and the time of your life call 305-949-6722 or Ticketmaster. *Not suitable for young children. Parental discretion advised