Victor/Victoria is based on the beloved 1982 film of the same name. When refined British soprano Victoria Grant, a penniless soprano, who is down on her luck in Paris, she discovers that producers and night club owners are looking for a sound that is much inferior to hers. On the brink of starvation, she is rescued by Toddy, a warm, generous, and flamboyant night club singer, who gets a brilliant idea, to dress Victoria as a man, and pass her off as a female impersonator, where she will delight audiences with her astonishing vocal range.

No sooner does Victoria find success in her new role, she falls in love with King Marchan, a tough Chicago nightclub owner, and possible gangster with abundant masculine appeal. King, in turn, is terrified to find himself falling for a man, and refuses to believe that Victor is really Victor.

With hired detectives creeping through her hotel room, King’s showgirl lady friend, Norma Cassidy, out for some jealous revenge, and King’s sweet bodyguard,  Squash Bernstein, revealing his homosexuality to smitten Toddy, Victoria’s life is a whirlwind of complications. Can she really go through life being Victor/Victoria?

Victoria must decide which is more important, a thrilling new career, or sweet and sudden love. With a jazzy, sophisticated score by Henry Mancini and Frank Wildhorn, Victor/Victoria is a wise and moving story about self-discovery tolerance, and second chances.


NOW ON STAGE AT THE BROADWAY PALM

One of the most beloved musicals of all time, recently on Broadway is headed for Southwest Florida with its magnificent score and delightful story live on stage. Based on George Bernard’s witty comedy Pygmalion, My Fair Lady tells the unlikely love  story between a professor, Henry Higgins, and a cockney flower seller, Eliza Doolittle.

Meanwhile, Eliza endures speech tutoring, endlessly repeating phrases like “In Hertford, Hereford and Hampshire, hurricanes hardly ever happen," and “The rain in Spain stays mainly in the plain.” Frustrated  she dreams of different ways to kill Higgins, from drowning to a firing squad. Just as they are ready to give up, Eliza suddenly recites the phrase in perfect upper -class style. Higgins and Eliza both happily dance and thereafter she speaks with impeccable pronunciation. After weeks of preparation, she has finally passed the test.

The unforgettable score includes “ I Could Have Danced All Night,” “The Rain In Spain,” “I’m Getting Married in the Morning,” “ On The Street Where You Live,”  “Wouldn’t It Be Lovely,” and more.  So entertaining, this show should be a must on everyone’s list now on stage through May 19, 2018. Tickets range from $45 to $70 with  at the box office located at 1380 Colonial Blvd., in Fort Myers.

Discounts are available for parties of 20 or more and children. Performances are Tuesdays through Sundays evenings with selected matinees. For more information call 239-278-4422-ext. 111 or visit online at  www.BroadwayPalm.com


FROM THE STREETS OF NEW JERSEY

TO FAME AND FORTUNE THE JERSEY BOYS ARE ON TOUR

They were just four guys from New Jersey, until they sang their very first note. They had a sound nobody had ever heard...and the radio just couldn’t get enough of them. But while their harmonies were perfect on stage, off stage it was a very different story–a story that has made them an international sensation all over again.

Anyone who has not seen them yet, take this opportunity to hear and see one of the most coordinated groups on stage in the Au-Rene Theatre . Tickets are $45 to $110 and up, now on sale at Ticketmaster or at the Broward  Center’s box office located at 201 S.W. 5th Avenue, Fort Lauderdale. Show times are evenings at 8 p.m. Matinees vary on different days from 1 or 2 p.m. For all other information call 954-462-0222 or visit online at www.browardcenter.org

COMING TO THE ARSHT CENTER IN MIAMI

Velma Kelly is a glamourous cabaret singer awaiting trial for the murder of her philandering husband and twin sister in Cook County Jail. Having grown used to her infamy and celebrity status as the “wronged woman” she is furious when she finds herself upstaged by a seemingly innocent ingenue, chorus girl Roxie Hart, a firstly timid but later ambitious go-getter who threatens Velma’s carefully cultivated  limelight.

With an equally ambitious and money-minded lawyer, Billy Flynn, the two women embark on a cold war of sorts, upstaging  each other to reclaim the public’s love, and to escape the hangman’s noose.

Chicago is the story of Roxie Hart, a housewife and nightclub dancer who murders  her on-the-side lover after he threatens to walk out on her. Desperate to avoid conviction, she dupes the public, the media and her rival cellmate, Velma Kelly, by having Chicago’s slickest criminal lawyer to transform her malicious crime into a barrage of sensational headlines, the likes of which might just as easily be ripped from today’s tabloids.

This starts a battle over the charismatic Flynn’s attentions, which Velma and Roxie must complete to keep themselves off death row, and onto the stage where they believe their infamy will draw in the crowds. Throw into the mix a corrupt prison warden called Mama Morton, who accepts money in exchange for privileges, and their action behind bars heats up while their fellow prisoners are left to fend for themselves at the mercy of the public defenders.

There’s never been a better time to purchase tickets for Chicago. This musical hit is the recipient of six Tony Awards, two Olivier Awards, a Grammy and thousands of standing ovations. The performance runs from May 8 to 13,2018, evenings at 8 p.m. Sunday at 1 and  7 p.m. in the Ziff Ballet and Opera House. Tickets start at $54 and up at the box office located at 1300 Biscayne Blvd., Miami. Information call 800-741-1010, or www.arshtcenter.org
​
​ 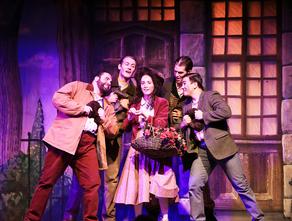 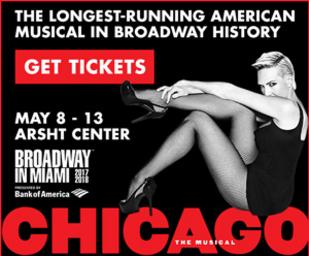 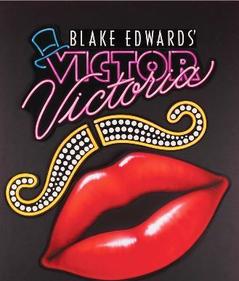 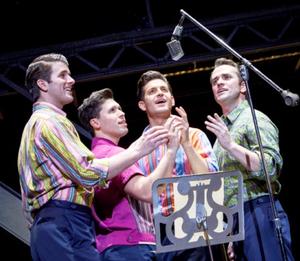