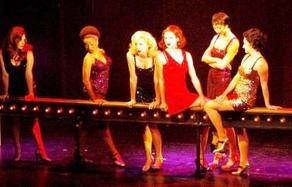 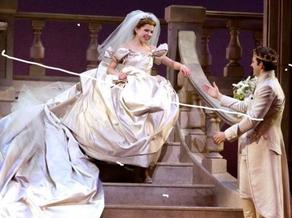 Sweet Charity is a musical based on Fellini’s screenplay for “Nights of Cabiria.” In the musical the central character is a dancer-for-hire at a Times Square dance hall. The musical opened on Broadway in 1966, when it was nominated for nine Tony Awards. As the story goes, a young woman known as Charity Hope Valentine, is a taxi dancer at a dance hall called “The Fandango Ballroom in New York City. Inside, the dancers are dancing the latest craze. Taxi dancer Charity continues to have faith in the human race despite apparently endless disappointments at hand, and hopes that she will finally meet a nice young man to romance her away from her sleazy life. Maybe, just maybe, handsome Oscar will be the one to do it.

Charity Hope Valentine works alongside her two best friends, Nickie and Helene. They have no illusions that what they are doing is renting out their bodies to any man who will pay. Charity wants more than anything to be loved. As she wears her heart on her sleeve, she is vulnerable to sleazeballs who will take advantage of her trusting nature, and the desperation to be loved. Nickie and Helene know that Charity's stories about her love life, although having a base of reality, are highly exaggerated and fantasized versions of the truth. Such as, the story of her encounter with famed Italian movie star, Vittoro Vitale.

But after eight years in the business, Charity comes to the realization that she cannot meet decent men in her job, which she tries to change despite her lack of skills for "respectable" jobs. Her luck with men may change when she meets insurance actuary Oscar Lindquist, who mistakenly believes Charity is a respectable girl who works in a bank. Oscar falls for Charity, who in turn falls for the love directed at her.

The questions become whether Oscar's love will remain if/when he finds out the truth behind Charity, and if so whether they can overcome their fundamental differences. Tickets are on sale for $34 for performances, now on stage through December 11, 2016 at the theatre’s box office, located at 8036 W. Sample Road, Margate. Call 954-344-7765.

The musical is based upon the fairytale Cinderella. The story concerns a young woman forced into a life of servitude by her cruel stepmother and self-centered step-sisters, who dreams of a better life. With the help of her fairy Godmother, Cinderella is transformed into a Princess and finds her Prince.

In the village square, a herald proclaims, ‘The Prince is Giving a Ball” to celebrate Prince Christopher’s 21st birthday.

The ladies of the kingdom are thrilled at the prospect of meeting him. Cinderella, whose beloved father has died, takes care of the home, her tempered and selfish stepmother and stepsisters. She does all the work, no matter how hard. All three order Cinderella to do everything.

Left alone, in her corner near the fire, she dreams of living an exotic life as a princess of anything other than a servant. Meanwhile, the King and Queen are getting ready for the big celebration. They hope that their son will find a suitable bride, but the Prince is very concerned about meeting all the eager women of the Kingdom. As Cinderella’s stepsisters get ready for the Ball, they are hopeful they will be the ones to catch the Prince’s eye.

As they finally leave, Cinderella imagines she has gone with them, when suddenly her fairy Godmother appears and transforms Cinderella into a beautifully gowned young lady, turning her little mouse friends and a pumpkin into a glittering carriage, with footmen, and she leaves for the Ball. The rest of the story is left to one’s imagination as she lives happily ever after.

One of the finest stories, to be enjoyed by every member of the family, opens in the Au-Rene Theatre at the Broward Center, opens December 13 through  25, 2016.  Tickets are $35 to $95 with $145 Airlines Club Level seating, available at the box office located at 201 S W 5th Avenue, Fort Lauderdale. For information call 954-462-0222 or ticketmaster.com  Visit on- line at www.browardcenter.org

THE CASINO AT DANIA BEACH PRESENTS

SINGING  ALL HER TOP BILLBOARD SONGS

Taylor Dayne is an American pop and freestyle music singer. She scored her first major hit when her debut single "Tell It To My Heart," reached number 7 on the Hot 100. She then went on to have a string of hits in the late 1980's and early 1990's, including the number 1 Billboard hit "Love Will Lead You Back."

Overall, she has had eighteen individual hit songs reach the top ten in Billboard magazine. These include most recently, the American and International hit "Floor  On Fire," and the 2008 song "Beautiful," which reached the top spot on the Billboard Hot Dance Club Play Chart. She has also topped the U.S. Billboard Hot Dance Club Play chart three times, and released her fifth album 'Satisfied," in February 2008.

Taylor grew up on Long Island, and by 4 or 5 was singing along with the radio. As she grew older, she started going a little more into a rock direction as Top 40 was going in a different direction, for a period of time. It was more of the super groups that were popular. She had her first solo by the time she was in first grade and by the fourth grade she was singing Jacques Brel.

Taylor will be taking center stage at the Casino At Dania Beach on Saturday, December 10, 2016 at 8 p.m. located at 301 E. Dania Beach Boulevard. For more information and tickets call 954-920-1511 or visit on line at www.casinodaniabeach.com

Kansas City Choir Boy is a highly inventive theatrical show told entirely through music about love altered by unexpected fate. A mystery told through flashbacks, the show tells the story of two lovers in small town America who separate when one goes in search of destiny and then disappears.

Borrowing themes from ancient myths, the show features songs by acclaimed Todd Almond, composer/lyricist and performed by Almond and rock icon Courtney Love. They are joined by a chorus of sirens and a string quartet with musical direction by David Bloom. Choir Boy is a love song for the computer age and a product of the 24-hour news cycle that feeds on the stories of the anonymous involved in the most human situations.

Following a sold out run in New York, this musical will have Miami audiences thrilled by this irresistible gem. Performances on Wednesday, Thursday and Sunday only, there will be limited VIP “Meet and Greet” Courtney Love & Todd Almond packages available.

Performances take place in the Carnival Studio Theatre at the Arsht Center located at 1300 Biscayne Boulevard, Miami, at various times and days. Audiences must be aware of the use of strobe lights and adult content & language. Tickets are available at the box office Monday to Friday, by calling 305-949-6722 or 877-949-6722 or Online at tickets@arshtcenter.org. *Not suitable for young children. 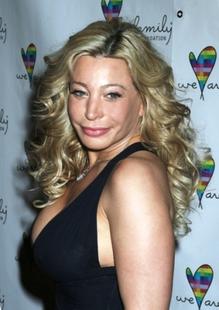