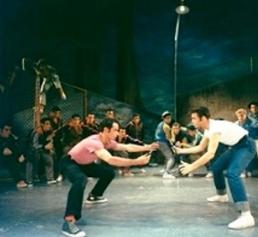 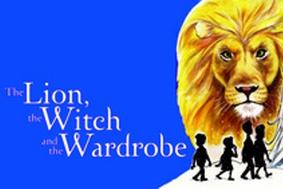 Two rival gangs, the Jets who are (Caucasian) and the Sharks (Puerto Rican), struggle for control of the neighborhood somewhere in the West Side of New York City amidst the police. They are warned by Lieutenant Schrank and officer Krupke to stop fighting on their beat.  The police chase the Sharks off, and that’s when the Jets plan how they can assure their continued dominance of the street.

Maria works in a bridal shop with Anita, the girlfriend of her brother, Bernardo.  Maria  has just arrived from Puerto Rico, and her family has selected Chino, a member of the Sharks, to be her future husband. After introductions at a neighborhood dance, the teenagers, Maria and Tony see each other, across the room. They begin to dance, are drawn to each other, and kiss. Her brother separates them and sends his sister home causing friction between them and challenging each other to a gang fight resulting eventually in rage and death.

Anyone who has watched Sesame Street may be aware of some parallels, which are performed by some of the puppets in the show. The  mechanics are  quite complicated, but the plot, on the contrary, is simple, and that is why it is difficult to keep everything in mind. Because, there are always constant changes.

Eleven puppets and three people seem to be sufficient, but the puppets require more than eleven people. Therefore, the true picture, of all the actors in the play, can require that the total show's participants range far beyond thirty, and closer to forty.

Avenue Q also has some similarities reminiscent of the Muppet Show and Miss Piggy with a long  list of lyrics and music such as, "The Avenue Q Theme Lyrics", "What Do you do with a B.A. in English", "Fantasies Come True", "The Money Song", "For Now Lyrics", "Tear It Up And Throw It Away Lyrics", plus 19 other kinds of lyrics and song.

The show contains mature themes and adult situations. Now on stage through November 20, 2016 in the Abdo New River Room evenings  at 7:30 p.m. and matinees 1 p.m. Tickets are  $30 to $45  at the box office located at 201 S.W. 5th Avenue, Fort Lauderdale. For information, call 954-462-0222 or Ticketmaster. Discounts available for ten or more. *Avenue Q is not suitable for young children.

THE LION THE WITCH AND THE WARDROBE

Audiences of all ages will be mesmerized when the Family Fun Series continues at the Aventura Center with the musical adaptation of the C. S. Lewis classic story, The Lion, the Witch and the wardrobe - Sunday, November 20, 2016 at 11a.m. and 1 p.m.  This much-loved, bewitching musical tells the story of four children during war-torn England who accidentally enter the land of Narnia by climbing through a magic wardrobe and becoming an integral part in restoring King Aslan to his rightful throne.

It was in 1940, four siblings Peter, Susan, Edmund, and Lucy Prevensie, including many other children, evacuated London during World War ll to escape the Blitz. They are sent to the countryside to live with Professor Digory  Kirke. Exploring the professor’s house, Lucy finds a wardrobe which doubles as a magic tunnel leading to a forest in a land called Narnia.

Here she meets a fawn who confesses he invited her in betrayal to expose her, to a witch who ruled Narnia for 100 years, using magic to keep it frozen for a lasting winter.  She ordered all Narnians to turn in any humans they came across. Returning through the wardrobe Lucy finds her siblings do not believe her story about another world inside the wardrobe, until her brother follows her where he meets the Queen of Narnia himself. When she learns he is a human, she places a spell on him.

Thereafter, strange things begin to happen as together, the siblings fulfill an old  prophecy. The inspirational messages of the power of courage, loyalty and love will captivate the young for years.

Tickets for the show are $18 day of performance with $3 lap seats for 12 months or under.  Each Family Fun Show includes a free pre-show face painting and arts activities as long with complimentary post-show sweet treat with an assortment of chocolates, caramel apples, and ice cream for purchase. The Center is located at 3385 N. E. 188 Street, Aventura. Buy tickets at aventuracenter.org or call 877-311-7469.

DUE TO POPULAR DEMAND “FUNNY GIRL”

THE MUSICAL HAS BEEN EXTENDED BY PEMBROKE

PINES THEATRE OF THE PERFORMING ARTS

Based on the true  life of Fanny Brice, “Funny Girl” is a successful stage and film musical that features a score by Jules Styne and Bob Merrill, along with a book by Isobel Lennart. The musical is semi-biographical, and is based on the life and career of Fanny Brice, the Broadway star and personality. Her stormy relationship with Nicky Arnstein is played out through a flashback, which incorporates her rise to fame

The musical is perhaps best known because of the film adaptation starring Barbra  Streisand who reprised her role from the 1964 Broadway Musical. Fanny‘s first radio show, in 1933, was The Chase and Sanborn thirty minute program.

She made her radio appearance as a toddler named Snooks, a role she premiered in a Follies skit co-written by Moss Hart. Later, she was known as Baby Snooks and Daddy with Hanley Stafford as Daddy. Fanny was so meticulous about the program and the title character that she was known to perform in costume as a toddler girl even though seen by a radio audience.
in June of 1950 on CBS-TV’s Popsicle Parade of Stars, Baby Snooks & Daddy.