A SHOW NOT TO BE MISSED

A musical and pop culture icon, Rock & Roll Hall of Fame member, Frankie Valli is enjoying a surge of nationwide popularity. The Broadway musical Jersey Boys, has seen the Four Seasons rise to fame, when they took home four Tony Awards for the show.

But Valli’s real success is still in his music. Frankie Valli's trademark, his falsetto voice, along with the Four Seasons, has made him one of the most enduring acts of the rock and roll era.

TO  PERFORM AT THE BARBARA MANN ARTS HALL

The Bacon Brothers are anything but a typical rock band. Each brother is  accomplished in their own right, playing gritty rock that is unique and authentic. Their style can best be described by their first album title, Forosoco, a word describing the blend of folk, rock, soul, and country influences.

Now, over 20 years later, The Bacon Brothers continue to impress audiences and critics with their soulful sound and their latest offering of Americana.

Older brother Michael, an acclaimed musician and composer, and younger brother Kevin, an award-winning actor, spent their childhood in their hometown of Philadelphia. Growing up in the city of Brotherly Love, Michael and Kevin were surrounded by music from an early age. Michael is credited with many original scores for film and television. His recent documentary “Long Exposure,” was shown on HBO on March 18, 2016.

Brother Kevin is best known for his acting roles in “The Following,” “Footloose,” “Mystic River,” “Apollo 13,” and has appeared in more than 80 films, and has a Golden Globe Award.

In this dark comic play, a handicapped young man seeks to escape the cruelty and bleakness that engulfs him on the desolate island of Inishmaan by participating in a Hollywood film being made nearby.

Dreams are in short supply on the island, particularly for the sensitive, physically challenged Billy Claven in Martin

McDonagh’s play. So when word arrives that an American filmmaker is coming to the neighboring island to make a motion picture, Billy goes after a part in the movie. He hopes for a trip to Hollywood, California to escape all the adversity he has to endure.

The play is inspired by director Robert J. Flaherty who went to the Aran Islands and spent two years working on a documentary depicting the horrible existence of those who live on what he describes as, "A waste of rock, off the Western Coast of Ireland," and how it affects its inhabitants.

The production features Laura Turnbull as Kate, Elizabeth Dimon as Eileen, and many other professional actors. McDonagh’s dark comedy work opens at Palm Beach Dramaworks on May 19 and continues through June 4, 2017, with specially priced previews on May 17 and 18.

Performances take place from Wednesdays, to Sunday evenings at 8 p.m., matinees at 2 p.m. Tickets are $66 adults, students’ tickets, with an ID, are discounted at the box office located at 201 Clematis Street, West Palm Beach. For more information call 561-514-4042.

DUE TO OVERWHELMING DEMAND

“NO WAY TO TREAT A LADY”

The Broward Stage Door Theatre has agreed to extend the dark comedic musical, now on stage through May 28, 2017, in theatre number #2. This comedy is a blend of devilish humor, romance, murder and music. The play features a publicity crazed actor turned serial killer, and the detective who pursues him.

Actor Christopher “Kit” Gill, and detective Morris Brummell have a lot in common. Both dream of being headliners in the New York Times, and both are contending with difficult and overbearing mothers.

Morris shares an apartment with his mother, Flora Brummell, ( Kimberly Abrams) while Kit’s mother, Alexandra, a recently deceased theatrical star, continues to haunt him. To make a name for himself, Kit poses as Father Barry Fitzgerald and pays a visit to Mrs. Sullivan, whose husband recently passed away. He eases her suffering by offering mundane lies and strangling her to death. His final coupe de grace is placing a red lipstick kiss on her forehead.

Morris gets assigned to the case but all the clues he finds lead nowhere. After many, trials and tribulations and extremely suspenseful moments, all’s well that ends well. Twenty musical numbers such as “Front Page News,” “I Need A Life,” and “Crime Scene,” and more, are included. Dustin Cunningham is also part of the cast. 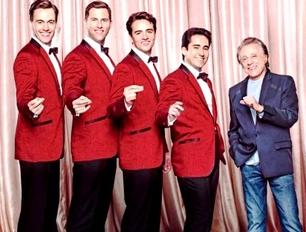 NO WAY TO TREAT A LADY 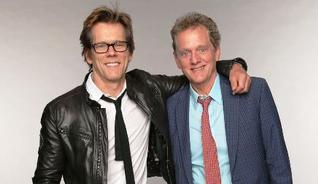 THE CRIPPLE OF INISHMAAN 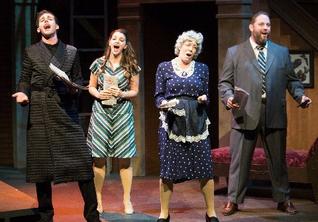 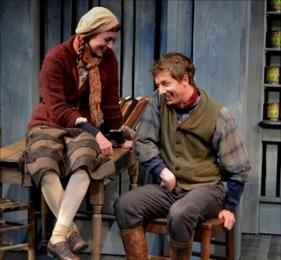