Andy Dick is an American comedian, actor, musician, and television and film producer. His first regular television role was on the short-lived but influential Ben Stiller Show. In the mid-1990s, he had a long-running stint on NBC's NewsRadio and was a supporting character on Less than Perfect. He briefly had his own program, The Andy Dick Show, on MTV. He is noted for his outlandish behavior on a number of Comedy Central Roasts and other appearances. Dick was also a contestant on Season 16 of Dancing with the Stars in 2013. He was partnered with former troupe member, Sharna Burgess, and placed seventh in the competition. Dick was on ABC's Celebrity Wife Swap on July 14, 2013. Now he makes a stop at the Boca Black Box for one night only!

Jessica Kirson is a powerhouse on stage. Jessica’s act is a hilariously relatable performance of sheer silliness, vulnerability and ridiculous characters. Her countless comedic character videos have racked up over 30 million views on social media. Her audience is multigenerational creating an excuse for large groups of friends and families to spend a night out together.


In the biggest cruiserweight tournament of all time, sixty-four of the best talent under 199 pounds will wrestle for supremacy, and to be crowned the first ever, CCW Cruiserweight Champion.  Watch the quarterfinals of the professional wrestling tournament that will have young talent and veterans, some of whom are on the cusp of greatness, competing against each other in a series of fast-paced high flying wrestling matches.

The Elite Eight will face off on the road to the Semi-Finals.  Talents like Sebastian Cage, KC Navarro, Jake St. Patrick, Will Austin, Jackal, and Chilean movie star and sensation Ariel Levy all to compete in this large bracket single elimination tournament.  You will not want to miss this.

Plus, watch other matches from amazing independent and nationally televised talents in an intimately close setting.

What is better than seeing The Diceman or "Ticked Off" Vic? Seeing them both TOGETHER! For one night only, these incredible comedic icons share the same stage to do what they do best: rant about society, sexually titilate you, swear, complain, and make fun of all the stupid, crazy things that connect as as humans.

​      The Atlantic City Boys are four dynamic lead singers who have wowed audiences in Las Vegas, Walt Disney World and, of course, Atlantic City! Now they lend their world-class vocals to the rock-n-roll harmonies of the 60s, singing the hits of The Drifters, The Beach Boys and Frankie Valli and the Four Seasons.

For years, one of the most popular vocal groups worldwide has been Frankie Valli and the Four Seasons. The story of this group has even been made into an exciting Broadway play called Jersey Boys.

The Atlantic City Boys show is a tribute to them and several of the other classic vocal groups. The show is presented with personality, charm and great vocal talent.

AFTER MIDNIGHT: THE PREMIER TRIBUTE TO ERIC CLAPTON
APRIL 10, 2021 | 8 PM
After Midnight aka AM12 is the complete premier tribute to one of the most respected rock and blues guitarist, singer, and songwriter, Eric Clapton.

Comprised of some of the best and most experienced musicians in the business, this 6 piece band brings together and authentic replication of Eric's timeless music. The spot on vocals and soaring guitar solos, that characterize Eric's songs take on new life in "After Midnight's" renditions of his classic hits.


THIS SHOULD END WELL TOUR WITH

Luis J. Gomez is a comedian, writer, podcaster and producer based out of New York City. He is most known for being one of the hosts of the popular Legion of Skanks. His television credits include NBC's "Last Comic Standing", Comedy Central's "Roast Battle", TruTV’s "Comedy Knockout", two seasons of NBC Seeso's "What's Your F@%king Deal?!", and more.

Kurt Metzger is one of the most talented writers and stand up comedians today. A Philadelphia native, Kurt started in the local scene with friends and comedians Kevin Hart and Big Jay Oakerson. He performs regularly at New York's top comedy clubs, including Stand Up NY, Caroline's on Broadway, Gotham Comedy Club, and the famed Comedy Cellar. 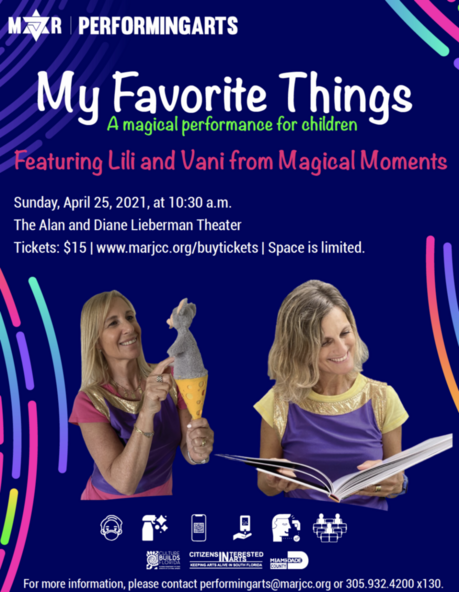 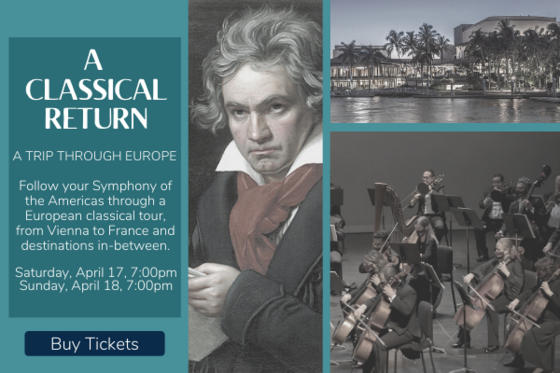 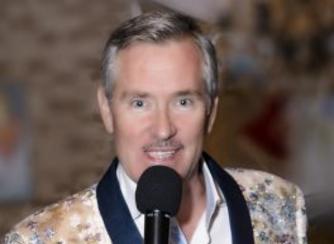 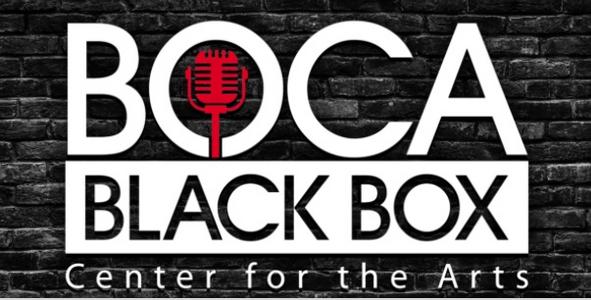 From his years as the polished front man at the distinguished Governor’s Club at Phillips Point to his neatly two decades as producer and emcee of the world famous Royal Room Cabaret at The Colony Hotel, Palm Beach, to his recent years as a singer, recording artist, and—after graduating top in his class at the Connecticut School of Broadcasting—Dick Robinson’s fill-in tune-spinner on Legends Radio 100.3 FM, Russell has amassed numerous fans of his audience-wowing musical talents and flashy show biz anecdotes. He will be sharing both again at his first two post-surgery performances:

Accompanied on piano by Kim Forman, who studied with Jazz Legend Marian McPartland, Russell returns for his much anticipated weekly engagements, offering songs and stories and a lot of laughs at the cozy indoor/outdoor Italian restaurant that describes itself as where “Nantucket Meets the Florida Keys,” under the skillful directions of husband-and-wife owners Mark Frangione and Karen Howe. “In addition to offering fabulous live music four nights a week, they have amazing food, too,” promises the singer.  Pelican Café is located at 612 US-1 in Lake Park, FL 33403.  For reservations, please call 561-842-7272

Russell will be the opening act for the third annual Palm Beach International Jazz Festival, appearing along with the Amazing MusicWomen Jazz Ensemble and headliner Jesse Jones, Jr. At this joint celebration of UNESCO’s International Jazz Day and a grand celebration of “the Great American Genre of Jazz,” Russell will perform songs from his first CD, the appropriately named Hello Again, share a few celebrity stories and tributes, and may even welcome a few special guests.

In preparing for his first two public performances since heart surgery, Russell has started writing his first book, a memoir about his years in Palm Beach and the many amazing stars with which he has worked, including Broadway-TV diva Faith Prince, with whom Rob shared a dishy virtual chat on YouTube earlier this month during a widely viewed CULTURE & COCKTAILS conversation hosted by the Cultural Council for Palm Beach County.​ 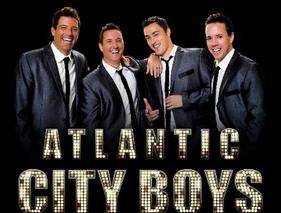 Last week, the participation of the legendary queen of reggaeton, Ivy Queen, along with Chesca and Goyo was announced. Today, additional talented artists were added to the lineup, including Spanish singer-songwriter Natalia Jiménez, Puerto Rican rapper Nesi, who is the female voice of the hit song “Yo Perreo Sola” by Bad Bunny, and Latinx American rapper Snow Tha Product. Also, the event will be hosted by the famous presenter, Gaby Espino. With six female singers confirmed to grace the stage, and several more to be announced, Urban Divas United presented by Neutrogena® honors its commitment to promoting a predominantly female-led lineup.

“It’s an honor to be part of Urban Divas United presented by Neutrogena®, especially as we celebrate the artist who paved the path for many of us in the urban genre, [Ivy Queen]. As a Puerto Rican, just like Ivy, I am proud to represent our island, as well as all women with dreams of succeeding, no matter the obstacles. Let’s go my queens!”, said Chesca, who was announced last week.

The Spanish singer-songwriter Natalia Jiménez is also excited to join the lineup, “Being a woman in the music industry is very difficult and there are many obstacles we’ve had to overcome. However, we have fought to earn a place in Latin music, and I hope that the next step is equality in all areas. Thank you to Urban Divas United for the invitation. An event like this, led by women, was definitely needed!”

To bring awareness to the current plights affecting women and our community as a whole, Urban Divas United presented by Neutrogena® will join forces with Conciencia Collective. Together, they’ll facilitate resources to inform and educate peers, artists and influencers, ultimately driving change against the racial and social injustices prevalent in the community today. This event is also in collaboration with the Miami Downtown Development Authority (DDA), an agency committed to marketing Downtown Miami around the world, supporting local businesses, and improving the quality of life for the nearly 100,000 residents in the city’s urban core.

“Miami has always been an international melting pot, and today our urban core is a hub for arts and entertainment,” said Miami DDA Executive Director Christina Crespi. “When approached with the idea of having some of the most iconic Latina acts put on a show, we couldn’t think of a better place to host this virtual event than downtown Miami."

Fans must register by April 10 to enjoy the free virtual concert. For a minimum purchase, they can also register for the exclusive VIP Backstage Access for the opportunity to virtually shadow their favorite artists as they get ready for their big performances and chat one on one before they hit the stage. For more information, including registration details, visit www.UrbanDivasUnited.com. 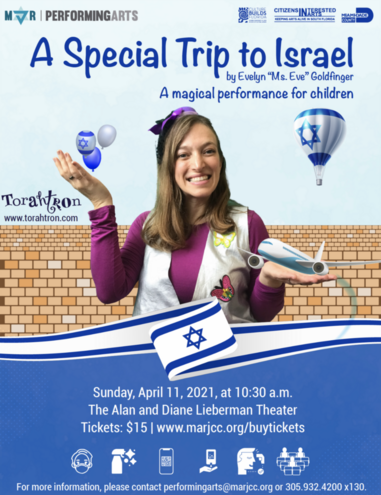 The Performing Arts department proudly presents this exciting series of performances for children in April.

Sunday, April 11, at 10:30 a.m.
Join Ms. Eve for this interactive family show featuring music and humor as she embarks on a special journey to Israel. This performance is intended for families with children ages 1–7.

Sunday, April 25, at 10:30 a.m.
Get ready for "My Favorite Things," featuring Lili and Vani from Magical Moments.
Children will learn all about their favorite things through music, puppets, beautiful stage scenery, songs, magic, and stories. This performance is intended for families with children ages 1–7.