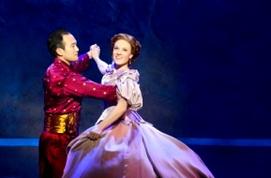 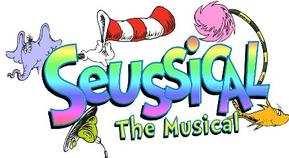 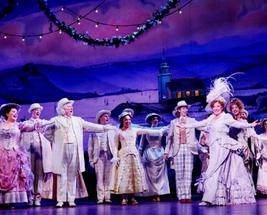 PRODUCTION OF “THE KING AND I”

Set in the 1860's Bangkok, the Musical tells the story of newly widowed Anna an adventurous Englishwoman and her son, Louis, set sail from their native England for Bangkok, Siam (now Thailand). She was hired to serve as governess and tutor to King Mongkut’s many children.

Although Anna has had many quarrels with the dictator, considered to be a barbarian by rulers of the West. The King is determined to usher Siam into the modern world, and believes a Western education can be a part of that. Anna is horrified at first by the many traditions he holds dear and struggle to find common ground.

Anna and the King teach each other about understanding, respect, and love that can transcend the greatest differences. The two eventually fall in love, and her influence on the King helps to democratize the country. This unconventional and tempestuous relationship continues to develop between the King of Siam and Anna Leonowens, the British schoolteacher.

Rodgers and Hammerstein’s The King and I is a moving, radiant story of East meets West, opens in the Broward Center’s Au-Rene Theatre on November 20th, and runs to December 2, 2018. Tickets are almost sold out. For availability,showtimes and prices, call the theatre’s box office at 954-462-0222 Avenue, located at 201 S.W. Fifth Avenue, Fort Lauderdale or Ticketmaster. Visit online at www.browardcenter.org.

WILL BEGIN PERFORMANCES AT THE ARSHT CENTER

“Well Hello Dolly!, It’s So Nice To Have You Back Where You Belong,” and that’s how it is, when Tony Award-Winning Broadway legend Betty Buckley stars in HELLO DOLLY!-the universally acclaimed smash hit of the year. Revival director, Jerry Zaks’, gorgeous new pro-duction is making people crazy happy!

Betty Buckley (Dolly Gallagher Levi) called “The Voice of Broadway,” is known as a legendary, multi-award-winning performer, and a 2012 Theatre Hall of Fame inductee. She was also a 2017 recipient of the Julie Harris Award for Artistic Achievement, given by The Actors Fund. Her Broadway credits include many Tony Awards for her performances in prominent top award winning shows.

As Broadway World previously reported, the Tony Award-winning Broadway , Betty Buckley, will star in the first national tour of Hello Dolly!, the Tony Award winning Best Musical Revival. The tour opens at the Arsht Center on November 20th, and runs thru the 25th, 2018. Tickets are available at the Center’s box office, in person, from $52 to $99 plus, located at 1300 Biscayne Blvd.,Miami or Ticketmaster at 800-745- 3000. For all other information call 305-949-6722.

“SEUSSICAL THE MUSICAL” AT THE

PEMBROKE THEATRE OF THE PERFORMING ARTS

Based on the stories of Dr. Seuss and one of the most performed shows in America, Seussical is a fantastical, magical, musical extravaganza! Tony winners Lynn Ahrens and Stephen Flaherty have lovingly brought to life our favorite Dr. Seuss characters in this production for all ages.

The works of Dr. Seuss weaves together his most famous tales and characters from at least fifteen of his books. The show follows the adventures of Horton, an elephant, who one day hears voices, coming from a speck of dust. He soon discovers that within this tiny speck exists the smallest planet in the universe! On this tiny planet live a tiny race of creatures known as the Whos.

Although ridiculed by the other animals in the Jungle of Nool for believing in something you cannot see, Horton stubbornly persists in his belief that the Whos exist. Traveling everywhere from the Jungle of Nool to McEligott’s Pool, some of the characters fall in love, some have desperate adventures, and some even save the world. Seussical is a sung-through musical which means that the entire show is comprised of music. There is very little “speaking,” and most of the lines and dialogues are sung.

Lead roles are: Cat in the Hat-A spunky, fun- loving narrator of the show who leads Jojo into an adventurous world and serves as his guide. Horton the Elephant -A sweet and kind creature who tries to protect all of the Whos. Jojo, a young boy from Whoville whose thoughts often get him in trouble, Gertrude McFuzz- An adorable bird-girl who is in love with Horton and very conscious of her one-feathered tail, and Mayzie La Bird-a lively and energetic, sassy and bold, bird-girl who has the biggest tail of them all! All that, in addition to Kangaroos and Monkeys!

ONE OF THE PIONEERS OF THE KPOP BOYS GROUP

B. A. P. is a South Korean boy rapper group formed in 2012. On February 2016 they completed their fifth extended play “Carnival” containing six songs. In March of 2018, B.A.P. released their third Japanese studio album, MASSIVE. The groups’ current five members are Himchan, Daehyun, Youngjae, Jongup and Zelo. Their 2018 North American Tour ,“Forever” will be coming to the Parker Playhouse on November 20, 2018 at 7 p.m. This tour will be the most unforgettable and memorable tour ever, with a very special “Meet and Greet,” with all five members, in person.

The groups’ leader has previously made comments on the influence that American musicians and other rappers have had on him. Jungup has cited hip-hop and dance music as influences. Get excited and be prepared to see the best of the best in KPOP history. Tickets are priced at $76.75 to $216.50, purchased through Ticketmaster, or call 954-462-0222. Parker Playhouse is located at 707 N.E. 8th Street, Fort Lauderdale. ​​           ​ 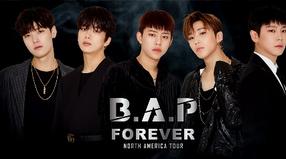