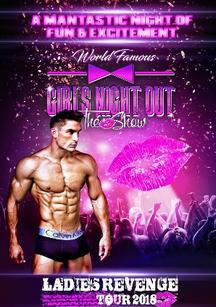 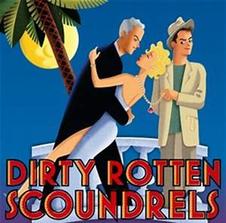 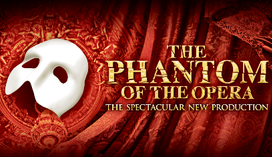 Dirty Rotten Scoundrels, based on the popular 1988 MGM film, takes us to the French Riviera for high jinks and hilarity. Sophisticated, suave with a good dash of mischief, this hysterical comedy features a delightfully jazzy score by David Yazbek (The Full Monty) and was nominated for a staggering eleven Tony Awards.

Lawrence Jameson makes his lavish living by talking rich ladies out of their money. Freddie Benson, more humbly, swindles women by waking their compassion with fabricated stories about his grandmother’s failing health.

After meeting on a train, they attempt to work together, only to find that their small town isn’t big enough for both of them. They agree on a settlement -the first to extract $50,000 from their mutual target, young heiress Christine Colgate, wins, and the other must leave town.

Sophisticated, suave and with a good dash of mischief, this thoroughly entertaining musical features a delightfully jazzy score, nominated for eleven Tony Awards  was composed by David Yazbek,  (The Full Monty), who also composed for this year’s Tony Award Winner for Best Musical, “The Band’s Visit.”

Tickets for Dirty Rotten Scoundrels, and for all Stage Door productions remain at $48 and may be purchased at the box office, in person, or call 954-344-7765. Visit online at www.stagedoorfl.org.


SPEND A GIRL’S NIGHT OUT WITH  THE

“Girls Night Out The Show” is an intensely exciting show, that will drive you absolutely WILD....in the best possible way. The show is a whirlwind of fun as these Adonis Men bring down the house with a Mantas-tic Night of Excitement. Get ready for the BEST GIRLS NIGHT EVER!  Whether you’re celebrating a Birthday, Bachelorette Party, Divorce or your Sheer Awesome Self; you will meet your party match with “Girls Night Out The Show.”

In addition to having The Best Girls Night Out Ever...you can look forward to 120 minutes of watching the sexiest male performers in the country. Whether your fantasy is a Cowboy, Fireman or Knight in Shining Armor, the show has something that will appeal to everyone.

“BELIEVE ME” TO ARSHT CENTER

His comic style takes the form of rambling, whimsical monologue, and self-referential pantomime.  He  had a starring role in the television series The Riches, as Wayne Malloy and has appeared in films such as Ocean’s Twelve, Oceans Thirteen, Mystery Men, Shadow of the Vampire, The Cats Meow, Across the Universe, and Victoria & Abdul. He has also been a voice in other films.

Izzard has cited his main comedy role model as Monty Python, and John Cleese, who once referred to him as the Lost Python. He has won numerous awards including a Primetime Emmy Award for Individual Performance in a Variety or Music Program for his comedy special “Dressed to Kill," in 2000.

Izzard’s website won the Yahoo People’s Choice and Webby Award. Izzard is openly “straight transgender” having cross dressed both on and offstage. He speaks French, German, Spanish, Russian and Arabic and has performed stand-up shows in these languages.

THE NEW VERSION OF THE

“PHANTOM OF THE OPERA”

Cameron Mackintosh’s spectacular new production of Andrew Lloyd Webber’s “The Phantom Of The Opera,” will be presented at the Broward Center’s Au-Rene Theatre from October 10, to 21, 2018. Based on the classic novel Le Fantome de L’ Opera, The Phantom Of The Opera tells the story of a masked figure who lurks beneath the catacombs of the Paris Opera House, exercising a reign of terror over all who inhabit it.

He falls madly in love with an innocent young soprano, Christine, and devotes himself to creating a new star by nurturing her extraordinary talents and by employing all of the devious methods at his command. Cameron’s brilliant Quentin Oliver Lee co-stars with Eva Tavaros in the 2018 touring production of the new “Phantom Of The Opera.”